Is a Djinni just a trickster? Can a wizard only learn magic? Must a Valkyrie always ferry the dead?

For Mortimer, Merlin, and Bryn, it seems the fates have already written the ends of their stories. When Mortimer asks unorthodox questions, the Djinni Elders exile him to a human school of magic—Albion Academy. Merlin's friendship with a mortal only increases his mother's determination for him to live up to the heritage of his ancestors. And Bryn's prophetic sisters outright declare that her fate is tethered to Mortimer, Merlin, and the mysterious door in the school's basement.

As the three of them struggle against the constraints of their families' expectations, they find themselves inexorably drawn into a conflict that encompasses rogue Faeries, dangerous mortals, and sorcerers hidden in Albion Academy itself. Defying their fates might be the only way they survive their first year at . . . 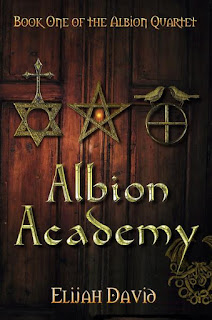 Albion Academy is available now from Portals Publishing. It is also on Amazon.com here. And Kindle here.
You can also add it to your shelves on Goodreads here.

Since I talked about my favorite heroic magic-users in fiction last month, I thought I'd tackle the other side of the aisle this time. Again, I'm using the term "wizard" to refer to anyone using magic. Saruman the Many-Colored Saruman begins life as a Maia (or angel) of Illuvatar, the Creator of Tolkien's legendarium. Selected as the head of the Istari (wizards) sent by the Valar (archangels) to Middle-earth, Saruman soon abandons the proscription laid on him against taking up leadership over men by establishing himself in Isengard, an abandoned fortress. In his attempts to study the work of Sauron, initially to help the forces of good defeat the Dark Lord, Saruman becomes corrupted by his own fear, bitterness, and longing for power. Changing his name from Saruman the White to Saruman the Many-Colored, he betrays his closest ally and one-time friend Gandalf and eventually becomes little more than a wizened old man whose only power lies in his voice. (S
Read more

Currently reading: Harry Potter and the Prisoner of Azkaban  by J.K. Rowling                             Gathering Blue  by Lois Lowry Currently Writing: Revisions/editing/2nd draft of SOMEDAY (the first book in my Merlin Quartet) I'm in the middle of rereading two series that have impressed me with their stories in the past: the Harry Potter series and Lois Lowry's Giver Quartet. (Technically, I've only read what was previously the Giver Trilogy , but Lowry has written a new book in the set, Son , which I wanted to read after the others since it has been years since my first reading of any of them.) Rereading these books after some time does odd things to my experience of reading them. First, it makes me examine whether they deserved my attention and praise in the first place. Because I am reading them for a second (or in the case of PoA, third or fourth) time, it's quite likely that they did deserve my attention. A book that invites multiple readings has at least d
Read more