Showing posts from July, 2016
Show all

Something Wicked This Way Comes: What I'd Want in a Musical Adaptation 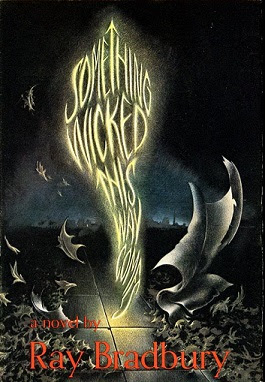 I was listening to the soundtrack for Finding Neverland (the musical) today, and when I reached the song "Circus of Your Mind" a thrilling idea occurred to me -- this is the sound I would want in a musical version of Something Wicked This Way Comes  by Ray Bradbury. It's possible that the idea was slightly influenced by my listening to the soundtrack for the Addams Family  musical recently as well. In any event, I started wondering about what else I would like to see in a Something Wicked  musical. The Story For those of you unfamiliar with Something Wicked This Way Comes , it is the story of two friends, Jim Nightshade and Will Halloway, who were born within minutes of each other on the night before Halloween. Their friendship is tested when a traveling carnival run by the mysterious duo Cooger and Dark comes to town. The carnival (true to its trope) brings the citizens of the town face to face with their deepest desires and fears, usually with messy results (su
Post a Comment
Read more

July 17, 2016
My friend Melissa recently shared an article detailing the author's Top 10 lists of the Top 100 books and asked everyone what their top 100 would look like. I'm not sure this is an iron-clad Top 100 for me, but it's a rough list (in alphabetical order for the sake of clarity). To no one's surprise, it's primarily fantasy books, and there are lots of repeated authors (mainly C.S. Lewis). 1984 by George Orwell A Midsummer Night’s Dream by William Shakespeare A Swiftly Tilting Planet by Madeleine L’Engle A Wizard of Earthsea by Ursula K. Le Guin A Wrinkle in Time by Madeleine L’Engle Abhorsen by Garth Nix Across the Wall by Garth Nix Alice’s Adventures in Wonderland and Through the Looking-glass by Lewis Carroll Beowulf Castaways of the Flying Dutchman by Brian Jacques Dark Lord of Derkholm by Diana Wynne Jones Descent Into Hell by Charles Williams Dracula by Bram Stoker Dreams Underfoot by Charles de Lint Dune by Frank Herbert Collec
Post a Comment
Read more
More posts