Showing posts from January, 2018
Show all

Monday Musings: The Taming of the Shrew (The Great Shakespeare Reading) 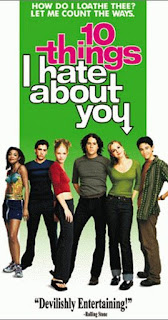 Welcome to the first installment of the Great Shakespeare Reading! What is the Great Shakespeare Reading? It's an attempt to read through all of Shakespeare's plays (to satisfy the completionist and the Shakespeare lover in all of us). I'll be reading a play or two each month and then sharing my thoughts on the play(s) here on the blog. From time to time, other bloggers I know may do the same. You're welcome to join in, too! Just pick up the next play in the sequence and share your thoughts either here in the comments or on your own website (just be sure to link back here and let me know so I can read your post). The first play we're covering is The Taming of the Shrew , but before I dive into it, let me explain why it's the first. I know that I have favorite plays, least favorite plays, and as-yet-unread plays in Shakespeare's works. In an attempt to avoid just picking the plays I like best and then floundering out of this when I hit the plays I&#
Post a Comment
Read more 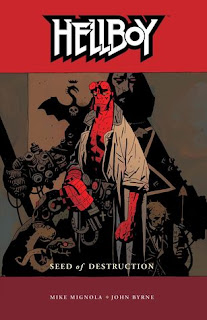 I've been reading a lot of graphic novels/comic books so far this year; in fact, 7 of the 9 books I've finished this year have been graphic novels. In an effort to put more reviews on the blog, I'm going to give my brief thoughts on each of those books in this post. Hellboy Volume 1: Seed of Destruction   I'm a fan of the live action Hellboy films, especially the second one, and I've been meaning to read through at least some of the comics that inspired them for some time. The first volume is part of the basis for the first film, and the connections helped me feel more at home in this world of fantasy and horror. I wasn't expecting a certain character's involvement to be so brief, and I hope they'll be back for more later. I wasn't put off to the point of never picking up the series again, but I admit to thinking the story barely gets going in the four issues collected here; it's pretty much over before it begins. I recommend this if yo
Post a Comment
Read more 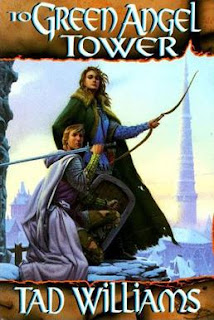 Well, I finally finished it; the Osten Ard reread is complete. To Green Angel Tower only took me 5 months (which is longer than reading the two paperback volumes took me in high school; but then again, that was high school -- an age when reading time was far more abundant). (By the way, TGAT -- book 3 of Memory, Sorrow, and Thorn  -- is actually longer in word count than the entirety of  The Lord of the Rings , so don't let's have any of that nonsense about Tolkien being longwinded, yeah?) And yes, there are SPOILERS ahead because I need to rant and rave about things. You have been warned. Cover art by Michael Whelan To Green Angel Tower  picks up in the weeks following the climax of Stone of Farewell . Josua's rebel forces are largely sequestered on the stronghold of Sesu'adra. Pryrates' and Elias' plans seem to cement more each day. Miriamele and her companions are still trying to reach Josua, with an addled Sir Camaris in tow. Things are not yet at t
Post a Comment
Read more

Monday Musings: Once Upon a Time Season 7 (So Far)

A while back I shared my wish list for Season 7 of Once Upon a Time , and now that we're halfway into the season, I thought I'd take a look at how well the show has fulfilled my wishes. Henry's daughter's name: because calling her "Little Girl" only works for so long. Plus, we all know names are important, so I expect hers to be very telling.  I watched the ending again tonight. Her name is Lucy. As in "light"; reinforcing my idea she's the new Savior.  Still no word on who the Savior is in this new Curse, and given the importance of Lucy's belief, I still think she's a candidate. However, with her in a coma, it's possible that Henry is the Savior, as they've been emphasizing his belief (or lack thereof) as well. Who her mother is: because it certainly isn't Violet, Henry's first girlfriend (last seen meeting him at the school bus before the final time jump in the finale). My personal theory is that it's
Post a Comment
Read more 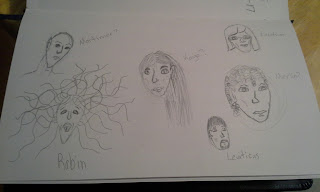 One of the art giveaway winners asked for something in the style of my  Inktober 17 drawing  (featuring several of the school teachers from  Albion Academy ), but featuring a mix of characters from the book. This is a rough sketch of some of the characters I might include. This is the final drawing, with the watercolor pencil added (though not yet activated).  And this is the finished piece, with the paint activated and the details inked in. I'm very pleased with the watercolor and the inking. I hope you are too!
Post a Comment
Read more 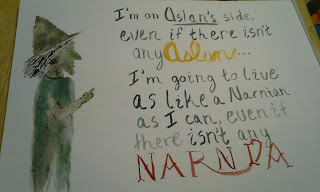 I've got a lot to share this month, owing to most of my artistic efforts in November and December going toward Christmas gifts that couldn't be revealed here until they were received. Also, I received a number of supplies for Christmas again this year, and I wanted to include those in this post. I'll start with the watercolor and drawing stuff. Every year a group of my online friends and I participate in a Secret Santa gift exchange, and this was part of my gift to this year's recipient. It's a painting of Puddleglum from The Silver Chair accompanied by some of his most famous words from the climax of the book. And here's a closer look at Puddleglum: This was another Christmas gift for a friend. It's a painting of me as a Hobbit and him as a Ranger a la Tolkien. I was pleased with the faces in this one. Here's a rough sketch I did to prepare for that picture, though my friend appears as a wizard instead of a Ranger. If you
Post a Comment
Read more

Monday Musings: Faeries and Cleverness: A Review of The Chestnut King 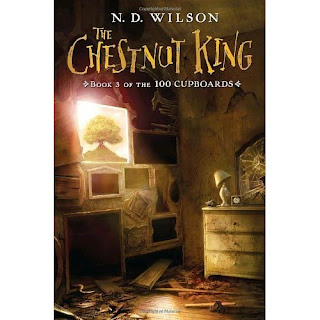 I finished the third book in N.D. Wilson's 100 Cupboards trilogy much faster than the second. Given how much I wound up enjoying Dandelion Fire , that should give you an idea of what I think of The Chestnut King . Picking up a few months after the end of Dandelion Fire , The Chestnut King  begins with Henry once again caught between two worlds, sneaking back to Kansas through the cupboards to spend time with Zeke. Of course, he's not nearly as sneaky as he thinks he is, but his family knows he needs time to figure out where he fits in the worlds. Henry's father, Mordecai, who returned at the end of Fire , has been searching for a way to defeat Nimiane and teaching Henry how to control the magic that sprouts within him. Nimiane's rise to power continues in leaps and bounds, precipitating Mordecai's journey to her home kingdom of Endor. Just before he leaves on this mission, Mordecai tells Henry that the situation is more desperate than anyone realized; Nimian
Post a Comment
Read more

Top 10 Tuesday: Top 10 Books on My To-Read Pile (AKA Christmas is a Time for Books) 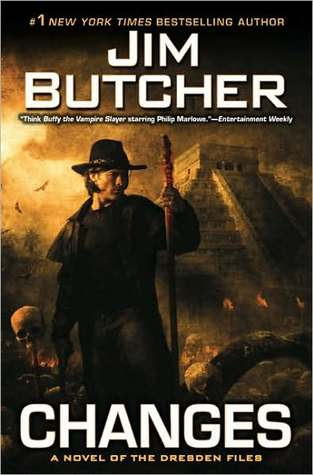 Since I love to read, my Christmas wish lists usually involve at least a few books. This year, I received 6 books for Christmas, with a few extras thrown in due to gift cards and post-Christmas shopping. Most of those are on this list, and a few more are just books on my shelves I want to dive into soon. Changes by Jim Butcher I finished Turn Coat  and wanted to dive into this book immediately, but held back because I felt I should finish one of the other books I was reading first, and because I didn't want to finish it before I received Ghost Story  for Christmas. Ghost Story by Jim Butcher Yeah, I basically want to binge read the rest of the current books in the Dresden Files series because I love these books so much. No, I don't think the title bodes well for anyone involved. Cold Days by Jim Butcher Without letting myself get spoiled too  badly on what comes, there's no way this doesn't involve Mab and the Winter Court. Skin Game by Jim B
Post a Comment
Read more

January 01, 2018
It's a new year, and while waiting for a new week/month/year isn't the best way to set a goal in place, I'm doing the new year's resolution thing again this year because that's how things have come together around here. But first, a little self-examination about last year's resolutions. How did I do last year? I laid out my personal reading resolution  here  on the blog. And . . . I did okay. I kept myself to the read a book to buy a book resolution, mostly. Christmas money kind of did that in. I didn't do so well with the read a book on the shelf before adding one, though I did switch books out more often than outright adding more. And I only read 12 out of the 62 books on my shelf that were there at the start of the year. That's less than 20% if you're keeping track (and given that my Goodreads total for the year is over 90, I really should have tried to squeeze in more of the original shelf). But I read more than 20 books beyond my ori
Post a Comment
Read more
More posts